How Transport and CLP-GHS are related 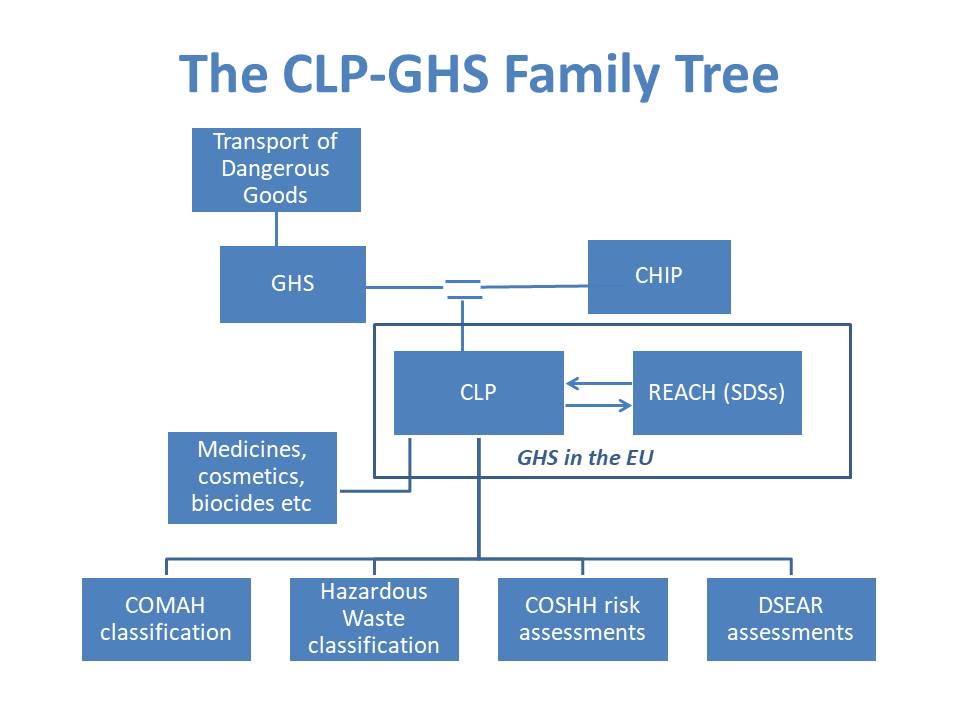 One of the questions I get asked regularly is about the relationship between products classified for Transport of Dangerous Goods, that is ADR, IMDG, IATA etc, and products which are classified for CLP (that is GHS within the EU).

It can be quite confusing for people who are starting chemical classification to learn that many chemicals require classification under both rules, and may require two labels, one for each type.

To explain why we have two different sets of hazard classification and communication rules, both of them coming out of the UN, it’s helpful to go back in time to the 1950s. This is when TDG started to be discussed, and implemented, at the UN, as it was recognised that it would help international trade if there was a single, simple way of communicating the hazards of chemicals and other dangerous materials when they were in transit.

The purpose of TDG has always been to help people transporting and storing dangerous goods with information relevant to them, to make sure they are stored and transported safely, and to provide information on what to do if there is an accident or incident, and the dangerous goods are released.

This means that the risks which TDG are interested in are:

If you’re familiar with CLP and GHS, you’ll recognise that only the first three hazards are included in GHS, and the last three, radioactives (Class 7), biological hazards (Class 6.2), and elevated temperature substances are not GHS or CLP hazards. Some hazards listed under Class 9, Miscellaneous, for TDG, may not occur in GHS.

It’s likely that a lot of material would be released in a transport incident, e.g. an entire road tanker, or a series of railway wagons, and TDG addresses these for transporters and first responders like the fire service.

However, people storing and transporting dangerous goods, including chemicals, are not meant to open the container, and TDG reflects this.

In direct contrast to this, GHS, CLP (and its predecessor CHIP), are classification systems for chemicals as they are supplied to the end user, which is usually summarised as “chemicals for supply”, and of course the end user is going to open the container and potentially be exposed to the contents while they are being used.

This means that chemical classification for supply is interested in lower level hazards than TDG, and also longer term health effects like carcinogenicity and reproductive toxicity, which are irrelevant for TDG purposes.

The classification of chemicals for supply can be traced back in the EEC (as it then was) in the 1960s, which developed into the CHIP system in the 1990s, and which remained in place in the EU until it was replaced by CLP, which is the EU’s implementation of GHS.

Similar “classification for supply” systems developed in other countries in parallel with the EU, including the USA, Canada, Australia etc, but this meant that they were quite different to each other, which didn’t help with international trade.

Since the 1990s, the UN has been working on creating an international system of classification of chemicals for supply, which is what the GHS (Global Harmonised System) is.

There is actually quite a close connection between Transport of Dangerous Goods (TDG) and GHS, because GHS uses many of the same tests and thresholds as TDG (in fact GHS references Transport’s Manual of Tests and Criteria for e.g. physical hazard tests). You could think of TDG as being the “parent” of GHS, despite the differences described above.

However, GHS in the EU, which is brought into effect via CLP and Annex II of REACH (for Safety Data Sheets) is more complicated than “pure” GHS, because it’s still partly based on CHIP, through the Harmonised Classification List (which is based on the old CHIP Approved Supply List), and the REACH regulation, which brings in extra non-GHS hazards like PBT (Persistent, Bioaccumulative and Toxic) and vPvB (very Persistent, very Bioaccumulative).

In fact, I made the infographic at the top of the page to show the relationship between TDG and CLP (if you’d like a pdf copy, please email me).

The infographic shows how TDG affects GHS, which in turn affects CLP, and also that REACH affects GHS in the EU as a whole.

In practical terms, this means is that there are a lot of “upstream” regulations which can be changed, which will then mean that CLP has to be altered. For example, a change in a classification threshold for a TDG hazard would be adopted into GHS, and then into CLP.

The next thing to think about is the differences between TDG and CLP, and I’ll discuss this in next week’s post.