Dinty the DDT Chimp Part 2: how hazardous is he?

Last week I shared a picture and article on Dint-ty, the DDT chimp, and asked the question whether I was behaving irrationally when I felt a shudder to even think about DDT, which is still a very useful insecticide against malarial mosquitoes.

So how hazardous would Dint-ty have been when he was new, and would he have needed to be labelled to CLP if the regulations had been in force when he was made?

There are several things to consider:

What is the identity of DDT?

​DDT is the ISO name for 1,1,1-trichloro-2,2-bis(4-chlorophenyl)ethane dichlorodiphenyltrichloroethane (it is isomeric, and there are quite a few isomers possible). Its main CAS number is 50-29-3, and its EC number is 200-024-3. It is still in use today as an insecticide, approved by the World Health Organisation.

Probably because it’s still in use, one isomer of DDT holds an INN, that is an International Nonproprietary Name, which is used for pharmaceuticals and pharmaceutical actives. The INN list is held at the World Health Organisation.

DDT’s INN is clofenotane, which sounds a lot less scary than DDT, simply because we have so many bad associations round the name DDT. Clofenotane is apparently classified as antiparasitic, including for ectoparasites and scabicides.

There are several old scientific papers dating back to the 1940s which discuss DDT in glowing terms, as this “wonder product”, which are available freely online e.g. The Chemistry of DDT, and DDT: An Ideal Insecticide and Larvicide.

There is also more modern information available from the USA’s Pubchem site, and the Inchem site, which is run by the International Programme on Chemical Safety (IPCS) and the Canadian Centre for Occupational Health and Safety (CCOHS)​.  There is also a very good article “DDT from Miracle Chemical to Banned Pollutant“, which summarises how DDT came into widespread use, and then fell out of favour.

However, it is pretty much impossible to know which one was used to make Dint-ty after all this time.  There is a faint fruity or aromatic odour from him, which is more pronounced in warm weather.  This may be from DDT itself, with or without some residual solvent.

Most of these solvents are classified as being hazardous in their own right, which would potentially affect any CLP classification we would have applied to Dint-ty.  However, as we don’t know which solvent was used, we’ll have to classify Dint-ty on the basis of the known component, that is DDT.

Would DDT be classified as PBT or vPvB?

DDT is classified as a Persistent Organic Pollutant under the Stockholm Convention, see ECHA’s website here, and it is possible that a PBT and vPvB assessment was undertaken when it was placed on the POP list.

But there is no record at ECHA of DDT having been classed as either PBT or vPvB.

This is something of a mystery, because one would have thought that DDT would be PBT on the following grounds:

However, the PBT and vPvB assessment may:

It would be good to know whether DDT has been assessed for PBT or vPvB, for interest.

PBT and vPvB is supposed to be a predictor of adverse long term effects in the environment, so if DDT doesn’t meet the criteria, then there may be something wrong with how they are calculated!

What is the current CLP classification for Dint-ty, based on DDT alone?

Dint-ty is clearly an article designed to release chemicals, so the answer is yes, in theory he would have to be classified and labelled for CLP (if DDT wasn’t banned in the EU under the Stockholm Convention, as we don’t have a significant malaria problem where it might otherwise be used for public health reasons).  Of course, an SDS should also be provided, for professional users and industrial companies further up the supply chain, again from our theoretical position..

A quick search on the ECHA website brings up a Harmonised Classification for DDT as follows:

The single asterisk for Acute Tox 3* H301 indicates that this is a minimum classification, and you can increase the classification if you have evidence to this effect.  We don’t, so we’ll stick with Acute Tox 3, H301.

As DDT is a pesticide, the Harmonised Classification covers all of the hazards of the substance, so we don’t need to consider other hazards (which is just as well, as it hasn’t been registered for REACH).

A label for DDT would have to include:

As usual with modern Harmonised Classifications, we’d have to choose up to 6 ​P statements from the 18 possible P statements which are applicable.  15 have been derived from the H statements, and a further 3 are available because Dint-ty is a consumer product.  Knowing how the product would have been used, I chose P102, P101, P260 , P308 + P313 , P301 + P310​. The last bit of the label information becomes:

So our little cardboard chimp would have to include a label like this (not using the small package derogation): 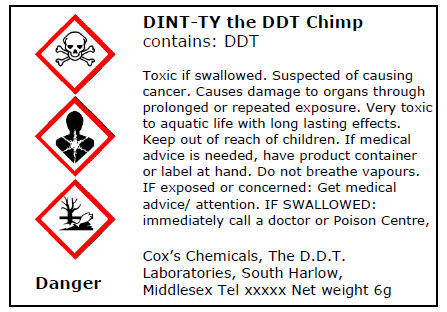 Note that this label does not give any information on the long term ecological impact of using DDT, this type of information would only be available to professional or industrial users via the Safety Data Sheet.​

Would you have Dint-ty in your house today, if it was legal to place him on the market?

I certainly wouldn’t, regardless of how bad a fly problem I had.  (I don’t use fly sprays either, even though we live in the country and are bothered by flies in the summer.  My personal preference is for physical methods of insect control: opening the window to release an insect, or the traditional swatting with a rolled up newspaper).

So you may wonder, is Dint-ty still hazardous today? It’s an interesting question, and there’s certainly an odour from him in this warm weather, but I don’t know what it is.  For the time being, I’ll leave that question on one side.